Another week, another 5 days of indecision as the Rand slowly edged stronger.

Back under R14/$ is good news for importers and investors (not so good for exporters!), but although it has edged lower, the week's move has remained in a tight band.

Amidst the slew of global news, economists are battling to rationalize what is 'moving' the market.

The fact is, sometimes the markets tread water for a while before we see the market starting to trend again as the underlying sentiment bubbles to the surface.

This is what the Rand is awaiting...

...but for now, let's get into the review to see if we can find any clues for the future.

Here were some of the big headlines from the last week:

And so the open of the Rand was around R14.12 to the Dollar, as the local unit continued to get stuck in the same narrowing band of trade, with a range of a mere 70c in the last 5 weeks...

While this may not sound very small, it is a lot for the Rand in the way that the market normally trades - having moved some 22c per day on average the past few years!

This week was a big one as everyone awaited news on SA's interest rates.

Considerations for the Reserve Bank were far and wide, both local and global, as the playing field had shifted since their last meeting with big changes in inflation in the US - an indicator for the global economy.

But this waited on Thursday.

The week began with global news taking centre stage as the Israel-Hamas conflict continued. Israel refused to be bullied and continue to take out key targets across the Gaza Strip, weakening the terrorists resources and positions - including underground tunnel networks.

The international view was for an immediate cease-fire and peace agreement...but there is no peace without war.

Things eventually continued on until Thursday, when a cease-fire was finally agreed upon - but certainly not without huge advances having been made by Israel.

This area will remain a key focus in the coming weeks, as tensions are still at boiling point - and this can well affect markets as potential trigger which we will keep watching.

The Rand rode all of this news with a bit of uncertainty, especially as spikes of cases popped up in East-Asia, threatening of more supply chain issues should more lockdowns happen.

Stats SA released April’s consumer price inflation figures on Wednesday which accelerated to 4.4% y/y, the highest reading in more than a year and up from 3.2% in March. The statistics agency also published retail sales figures for March, which took another knock as a third wave looms, contracting by 2.5% y/y following a 2.2% expansion in February.

By Thursday, the local unit had traded sideways for the most part, until the Interest Rate Decision came along: 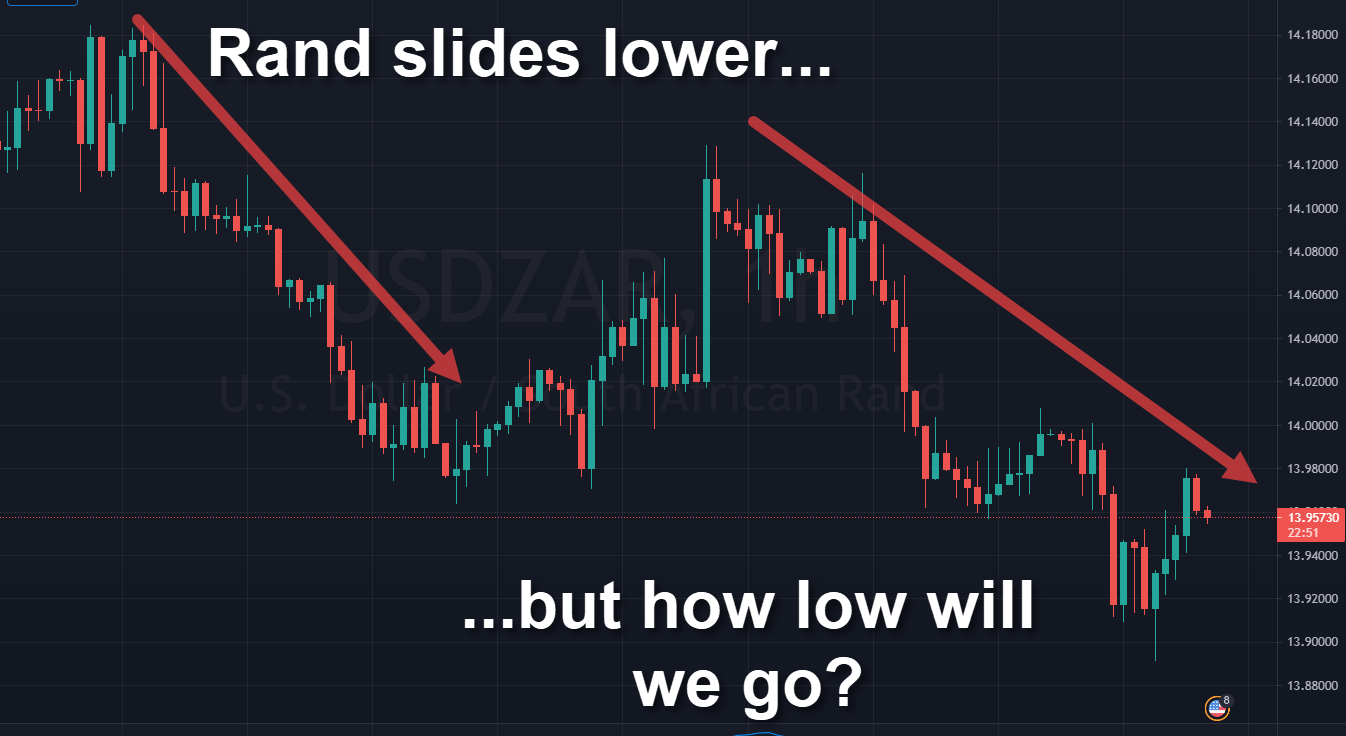 And then we finally got some direction for the week, as the Rand accelerated stronger vs the Dollar, breaking down as strong as R13.89 by Friday afternoon!

The SARB insisted that the uptick in inflation (now 4.4%), was just temporary, and that their next move of interest rates was going to be up...

...for now however, they remain the same as we await their next meeting.

And all of a sudden, it was Friday already...

SA was waiting with baited breath for news on Friday evening as it was a make-or-break event for the strong Rand as investment grade rating agency, S&P Global, will publish its review of the local and international fiscal applications within South Africa.

Research conducted by independent researchers have indicated that S&P will likely maintain its current rating of BB- as the country’s economy has been in a difficult position the last six months. The positive side of not downgrading South Africa again is that it delays future downgrades and can give the country a chance to recoup the large losses created by the pandemic. If a downgrade does occur, it may have a snowball effect and other credit rating agencies could follow suit in November.

No news emerged on Friday afternoon/evening that could affect the Rand, as it traded steady beneath R14.00 through the afternoon.

As we look ahead to the last week of May (already!), the outlook from an event point of view is very quiet, with just a handful of ones to watch in the United States:

But there will be plenty to keep the markets on the edge, with continued tensions aplenty in social, political and financial arenas globally.

Once again, we will be keeping our eyes on what the Rand itself is telling us based on our Elliott Wave based forecasting system to give us some clues for the days, weeks - and possibly months - ahead.