This last week was the final trial of February for the Rand, after getting through the State of the Nation address relatively unscathed.

And it didn't really go as well as many hoped.

Volatility and volume came seemingly out of nowhere on Thursday, as we saw a massive turnaround for the ZAR.

We had been waiting (and calling) this for some time...but it still caught so many by surprise, just as things seemed to be getting rosier?

Why does it feel like our emotions are ALWAYS giving us the wrong signals?

Let's take a deeper dive into Budget 2021 and how the markets are triggered by events like this...

First things first, here were some of the biggest headlines from the 5 days:

So, with the Rand having survived the SONA largely unharmed, it was now onto the next big one...

As the week began, all eyes were already on Mboweni's speech.

And for good reason, he had a long list of troubles to address:

As for the Rand approaching his speech on Wednesday, it endured a few choppy waters on Monday, trading over R14.90, but by the time the speech rolled around, we were testing R14.50, and even below R14.40 during the afternoon!

So it would seem all was good...

Mboweni covered a whole bunch of points, and here were a few of them: 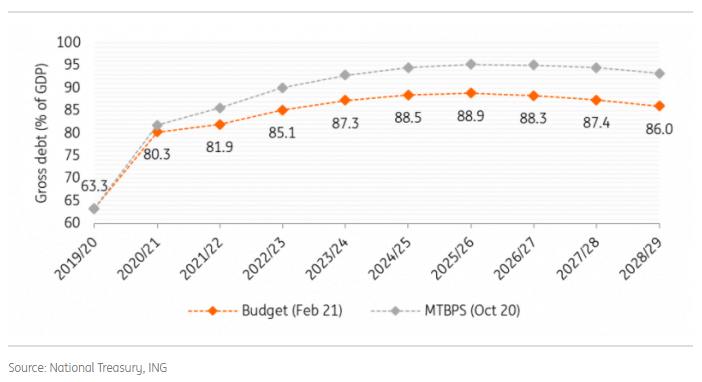 Overall, it was another non-commital budget. Some good ideas, some elaborate ideas, some incomplete or severely lacking ideas...

...and as always, the stigma hanging over every promise, as none of Mboweni's budget have yet gone according to plan.

But at least the Rand took it well...right?

But by Thursday, the tables had TOTALLY turned:

How does this happen? Why does the market move like this? Was the budget that bad, for the Rand to weaken so much?

These are questions that swirl around for investors after moves like these.

But the key factor here is to remember that markets are NOT moved by events - they merely are potential triggers for moves, and are not direction-givers.

We see this time and time again, as markets react TOTALLY differently to how we expect when an event happens. That is because the underlying emotion in the markets at that time.

And the Rand had been at a point of reaching a positive extreme, which meant a weakening cycle was imminent.

A key example of this just a few weeks ago was the Gamestop stock - mass human sentiment (along with some coordination) saw the stock fly higher and higher for no reason.

Only for the sentiment to reach an extreme (no one left to turn positive), and then the market dumped severely, now trading at $120 from its highs of $483, after going back down to sub $30 levels.

Markets will always be irrational...we just have to see that they are irrationally PREDICTABLE, like us humans.

Well, here was our forecast on Wednesday evening, before Thursday's trade even began:

It seems impossible to trace these moves, but our Elliott Wave based forecasting system helps us to make those predictions, just like these, by tracking human emotion in the markets.

And then when it came to Friday, the Rand's volatility continued...

We broke down to touch R14.80, before the market again rebounded higher, ending the week well over R15, even testing R15.20!

What a week it had been, with a more than 80c swing in the Rand's value!

And it had all come just as per our forecast, leaving the the Rand to lick its wounds, losing all the ground it had gained in February.

As we enter into March (yes, we are in March already), there are several economic events that could provide potential triggers, with Nonfarm Payrolls being the big one to watch:

Of course, there is plenty else from an financial, social and political point of view that could provide extra potential triggers.

But then, markets don't specially need any trigger to have a move (some of the biggest crashes in markets can be traced back to no particular news at all).

But again, we can expect plenty volatility.

As for the Rand, it is likely to extend its losses short term, but we will be continuing to watch some key levels in our larger degree wave patterns (based on our Elliott Wave based forecasting system) to confirm direction for the weeks and months ahead.