What a fascinating week in the markets as we see the Rand continue to claw back the losses from the last few months of Dollar strength.

It has been a long time coming, and now we see the Rand 100c stronger than it was just a few of weeks back.

Consumers will be hoping that this translates into cheaper fuel and goods, especially with oil prices also taking a further dip toward $60/barrel. And of course this has made importers smile on the one side, and exporters starting to get anxious.

On the global stage, we saw big news from Moody's and positive developments in the Trade War...

So let's get into the full review...!

To start the week, here was our forecast on Friday the 6th, giving all of our subscribers insight as to what to expect from the next few days. We saw the market at R14.7706, and the wave count suggested we would see a further drop into the target area of R14.66-14.40 over the coming days...

(...how could you have benefitted from having this information at the start of this last week?)

And it was a very interesting week that followed, as we saw a calm of sorts finally descend on markets. Here are some of the biggest headlines:

As for the Rand, it opened a touch below R14.80 on Monday, following worse than expected Non-Farm Payrolls on the Friday. The warning signs for the US economic slowdown were certainly flashing...but the economists could not seem to make up their mind, with differing opinions being offered.

It was going to be a big week, with a Trade War update only a tweet away...

The first news of the week on that front was the People’s Bank of China warming up the printing press as they announced another round of quantitative easing.

Over in the UK, the Brexit turmoil continued with Prime Minister Boris Johnson determined to deliver a ‘deal or no-deal’ Brexit come 31 October...

...however, he does not seem to have the support for this from the UK MP’s, as they rejectedthen Johnson’s second call for a general election. Despite this, the UK economy appears to be in good shape.

And then we were onto the big news of the week: Moody's thoughts on SA's Credit Rating

The agency's lead analyst for South Africa, Lucie Villa, told a journalist during a press conference at an investment conference in Johannesburg on Tuesday that the country's "stable outlook provided a low likelihood" that its credit rating would change.

For South Africans, this was a moment to just take a deep breath...

...despite all expectations of the downgrade, it appeared that Moody's was going to show some grace, yet again.

However, there were some key points identified by Lucie, such as her comments on Eskom: "Knowing the complexity of the issue, we know first that it will be an iterative process and that it takes time. So our view has been that is takes more than a few months to sort out certain issues."

Other issues such as SA's slow economy growth were highlighted, but on the whole, a positive piece of news!

And the Rand liked this, trading further to touch R14.61 by Wednesday morning: 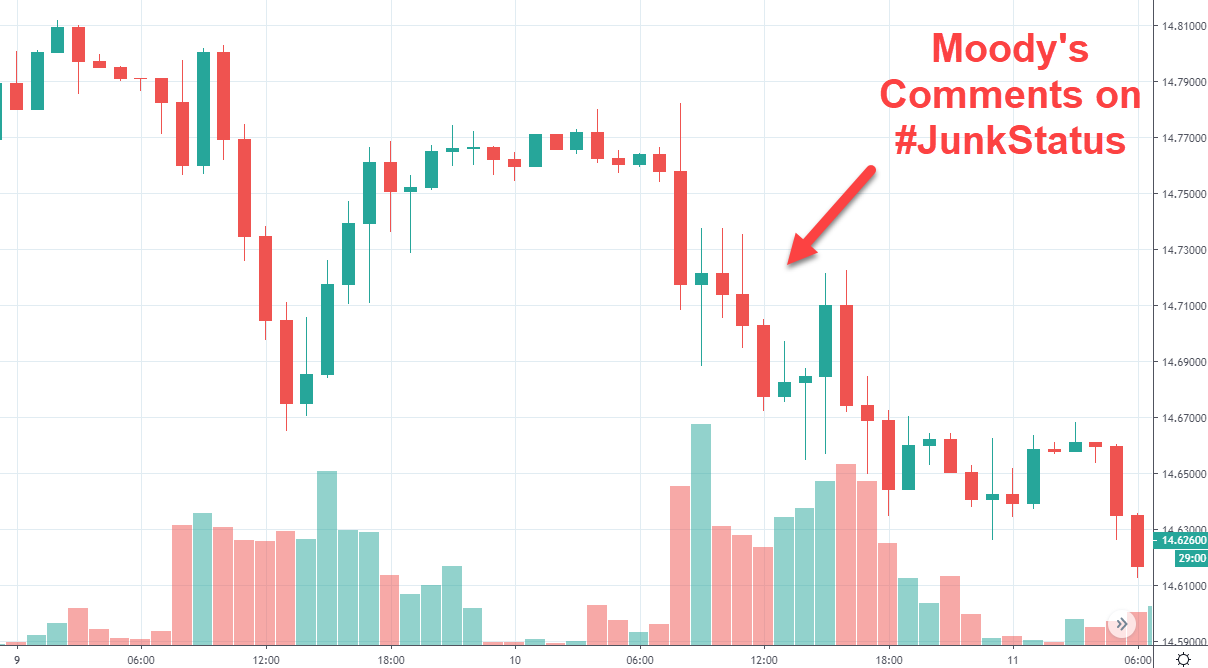 And the good news continued, as the Trade War appeared to be slowly simmering down. Trump announced he would be postponing the latest increase in tariffs until the 15th of October, stating that this is a "gesture of goodwill".

And then on Friday, China finally 'blinked' first, announcing that US Pork and Soybeans as well as other farm goods would be excluded from the tariffs. Pork prices in China have been getting out of control, and it is clear that China is now feeling the pinch...

...a very interesting turn of events, and certainly a feather in Trump's cap for sticking it out for this long!

In other news, there were some big headlines:

And the Rand closed out the week strongly, moving down to touch R14.50 on Friday. It had been quite a week, with a lot of positive and stabilizing news for the markets - and none more so for the Rand than Moody's comments.

All in all, the market had moved exactly with our prediction from the week before - another success for the Elliott Wave Principle...

Well, the week has started with the Rand off the lows of last week, and it is certainly going to be a busy week in terms of possible triggers, with local inflation, and US Fed and Bank of England interest rate decisions.

...and that is apart from the Trade War, Brexit and other potential shocks.

So expect another volatile week, folks!

Big question: How is this likely to impact the Rand?

As you can see from last week, we simply let the market itself provide us with the best guess of what was likely to happen - and it followed through perfectly.

How do we do this?

Through applying the Elliott Wave Principle (the study of human behaviour in financial markets) together with a unique combination of price ratio, momentum and time cycle studies to provide us with an objective view.

And, as you saw in the review above, a forecast like this gives you something that you can use to make objective, informed and actionable decisions. instead of emotionally-charged knew-jerk ones.

Based on our analysis, the next few weeks are likely to take many persons by surprise - please do no be one of them.

To get a look at what we are speaking about, use the link below to see the latest forecast: