Another week, and a more quiet-ish one for the Rand.

The market has been pretty stuck in the sideways band of trade, pivoting between the R14.00-14.55 range over the last few weeks.

It has given everyone a chance to breathe just a little...

But what does the future hold?

The markets remain turbulent globally, particularly in the stocks, commodities and crypto worlds.

Before we start, here were the biggest headlines from the 5 days:

Due to the USA holiday of Independence day, it pretty much meant we had a late start to the week for the USD/ZAR market.

When we hit Tuesday, that was when the action began in earnest.

Local worries persisted, as the government continued its authoritarian lockdown agenda, stating the '3rd wave' apparently had hit higher levels compared to wave 1 and 2, while the number of 'vaccinations' (read 'mass gene therapy experimental injection') stood at 3.3 million. That the 'vaccination' drive is continuing, despite the exponential spike in adverse effects and deaths since the 'vaccine' rollout started (not being reported by mainstream media) is concerning and ominous.

In more encouraging news though, things continued to progress with the prosecution and arrest of Jacob Zuma.

Eventually, on Wednesday, things came to a head as a team of heavily armed police units was on its way to arrest the former statesman at his home in Nkandla. Zuma turned himself in, and surrendered to police less than an hour before midnight on Wednesday to start serving his 15-month jail sentence.

Zuma will be the rainbow nation’s first democratically elected president to be taken into police custody for contempt of the Constitutional Court.

President to Prisoner. Quite a change of fortune. But surely the right one, after years of corrupt dealings - with contempt of court (the charge) just being one of the many lawless acts.

By this stage though, the Rand had already made it's moves on Tuesday, moving to hit R14.42 from where it had opened on Monday at R14.25.

The reaction to the arrest itself was fairly subdued, as most didn't believe it would have any lasting effect - and that the corruption drive needed to kick up at least another 10 notches. 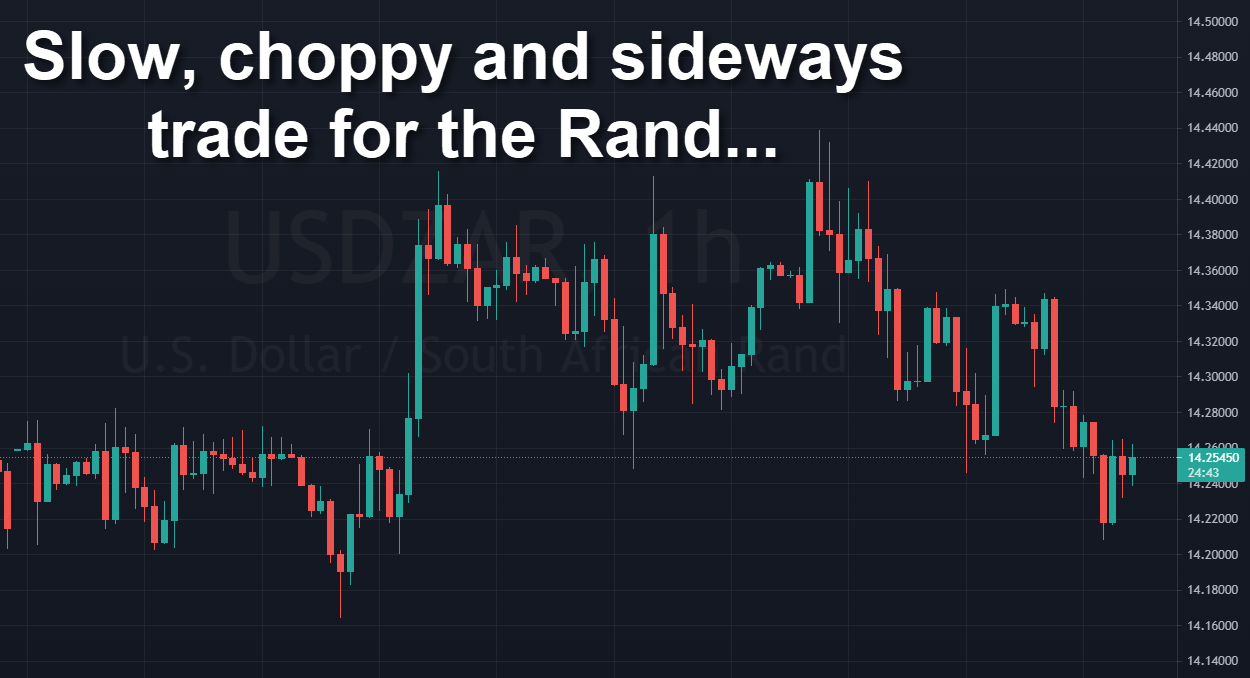 But regardless, justice is justice.

To get back to the Rand, trade continued to be mostly sideways and fairly calm.

Friday saw the market track down to touch R14.20, before eventually closing at the SA end of market around R14.25 to end the week's trade.

And so we await the breakout with baited breath...

The Rand is never kept quiet for long, so we know that the breakout is coming soon.

This next week does not have a stack of events, but this never stopped the ZAR from making big moves.

With plenty going on politically, economically and socially around the globe, we have learnt to expect the unexpected!

Once again, we will continue to filter out the noise and simply follow the what the charts themselves are telling us, based on our Elliott Wave based forecasting system.