Phew, a week of action in SA politics - and the financial world!

The Rand came into the week with jitters, and plenty of them. The situation with Nene was making things fairly uneasy, and I am sure everyone remembers last time the Finance Minister was fired...

...when Gordhan got dumped in February last year in May, and the Rand went for a loop of almost 50c, and over R1 in the days following

...or the #Nenegate and Van Rooyen scandal back in 2016, which saw the Rand spiral multiple Rands higher

This year however, was a little different.

Let's review how it all happened!

First things first, on Friday the 5th of October, we issued our forecast for the next few days.

A topping out in the short term was expected in the 14.65-15.10 area. This meant we were in for a bit more upside, but then we should see some Rand strength for the remainder of the week (click image to enlarge):

There were a number of big news events from the week:

All too quickly, the USDZAR market had moved from R14.73 to R14.98 around the open of business.

There was no clarity on Minister Nene.

Supposedly, his resignation letter had been sent in, but the Presidency said it had not received anything as yet...

...and so the waiting game rolled on.

The Rand consolidated some of those losses, and made its way through to Tuesday, where Ramaphosa announced that he would make an announcement on Nene's future at 4:30pm SAST.

Surely this would have triggered a ZAR collapse?

That does not guarantee anything. In fact, it only clouds your judgment.

The Elliott Wave Principle said we were due for the market to top out - and that's all that mattered to us (not looking for any reasons, as economists do...)

And that was exactly what we got...

The appointment of Finance Minister Tito was a good decision - granted. And business leaders hailed it as one of the finest appointments in recent memory

But no one could have seen such a positive Rand move.

Not based on previous history of finance minister changes. 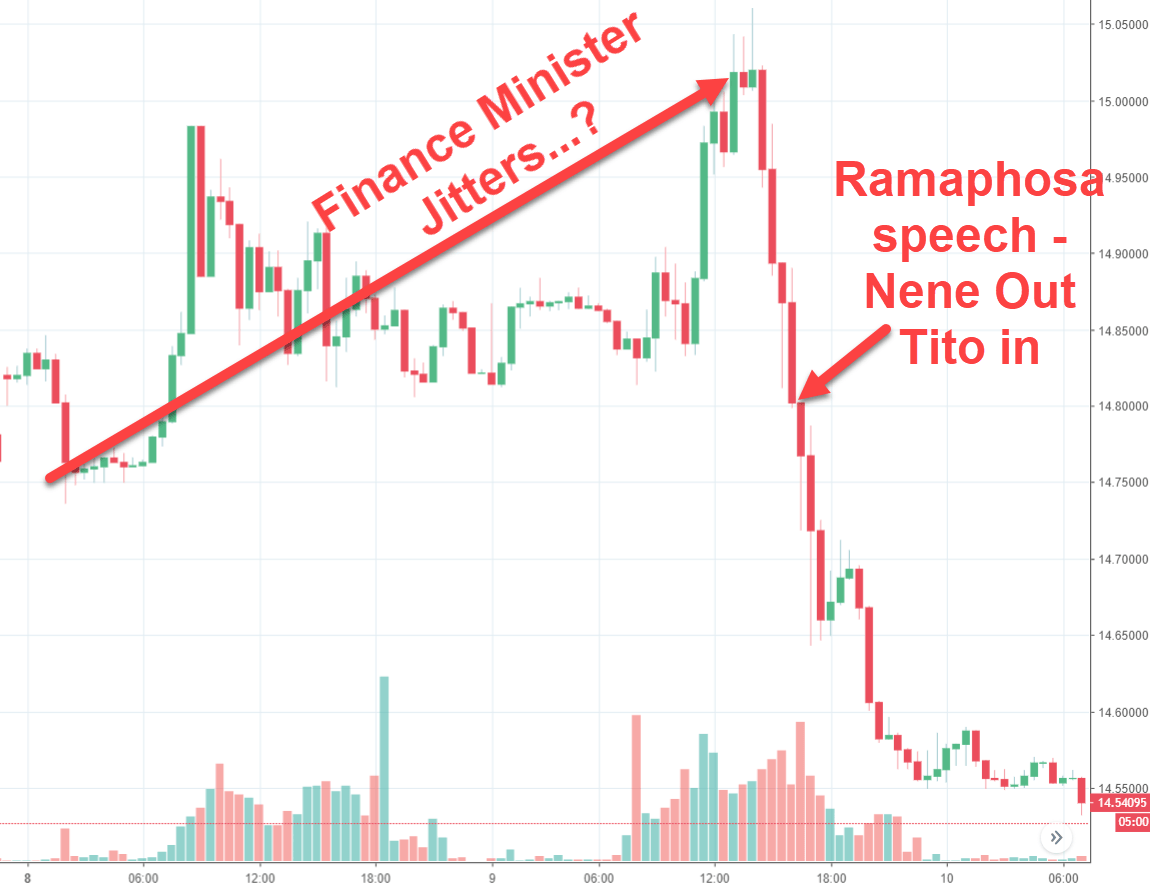 The Rand had to consolidate some of its gains over the next few days, which saw it open Friday at R14.65, but it had been a great recovery from Tuesday's high of R15.06...

However, there was a lot more to the week. Here's a few of the other headlines:

The last day of the week was a bit of a mixed back for the Rand, as it strengthened down to nearly R14.40/$, before losing ground again in the late afternoon, taking it back over R14.50...

The day ended with no news yet on Moody's decision, which was normal for the Credit Rating agencies to leave it until later in the day...

...but it did make one wonder if they really would make a call before the mid-term budget?

Anyway, that was that. The week was over. Overall, top-class for the ZAR!

The Rand has started the week on the front foot, breaking below last week's best levels, with more strength expected.

It appears that Moody's have now delayed their announcement until after the Mid- Term Budget Speech - probably a good call! So it's wait and see time!

This week sees the EU-Brexit Summit which could bring some extra volatility.

Overall though, we will forget the news and focus on the sentiment patterns themselves. And we suggest you cut through the noise and do the same, giving you an objective view to offset your natural tendency to make emotionally-charged decisions.

Simply click the button below to get 14 days free access to our forecasts. No obligations. No card needed.