There always seems to be over-confidence and complacency, particularly in markets & economics, before disaster strikes.

... a relaxed care-free atmosphere, as if there is no danger at all.

And then suddenly things change.

...and attempts to rationalize what has happened.

This is just what happened this last week, as economists and leaders alike were shocked at inflation data coming out of the USA.

Blitzing through records not seen tested for decades, inflation has begun to move from a slow walk to a canter.

And that's not to say it cannot speed up further.

(What do you expect when you have been dropping money from helicopters?)

Some of the biggest inflated prices are not even included in the figures released, such as lumber...

As for the Rand, the uncertainty with these numbers certainly gave it a jolt.

But let's get into the full review to see what we can find out about the days ahead...

To get started, here were the biggest headlines from the 5 days:

As we began the week with the Rand opening just a tad over R14, the world was still in shock over the US Non-Farm Payrolls that had come in the week before on Friday.

A miss of 266k jobs created vs the 978k expected meant a massive miscalculation - bringing worry to economists of whether the expected recovery was realistic.

The unemployment rate also took a step in the wrong direction, increasing to 6.1% (5.8% expected).

These weekly ‘free’ cheques have become a curse rather than a solution, with little incentive to get back to work!

So with the wind in it's sails, the Rand was hoping to make further inroads...

For once, it seemed as if all the action and controversy was not on local shores, but globally.

Over in the US, it was panic stations as most of the East Coast's fuel just stopped, following a cyberattack on the Colonial pipeline which stretches from New York area down into Texas.

Over the weekend, cyberhacker group DarkSide infiltrated their systems and shutdown the pipeline, throwing the supply chain for fuel into disarray, and only made worse by panic buying by locals in fear of it running out.

A ransom of between $4-5 million later, the pipeline was operational by later in the week...but the damage had been done, and supply issues will persist for a few weeks to come.

Then you had Israel and Palestine on the verge of official war… tensions escalated as the week went on, with Palestine and specifically the Hamas group shooting more than 1050 missiles into Israel in less than 40 hours. Israel's 'Iron Dome' was working double time to stop destruction, and they retaliated with significant attacks of their own. Ground troops began to build on the border by Thursday, as a ground war/invasion became a reality.

Biden's leadership has been severely lacking already...and suddenly it was a combination of foreign and domestic terror attacks.

How will he respond?

To make matters worse, on Wednesday we had the inflation figures come out - and wow, did they shock economists!

The print showed that core prices rose 0.9% compared to March (the biggest monthly increase since 1982) and 3% year-on-year (a 25-year high).

This figure also doesn't even take into account huge increases in material such as lumber, which is up 100s of percent higher in price than just a year ago.

All of this going on was trigger after trigger or market activity...

But overall the Rand did not fair too badly.

Following the inflation news, the market weakened through to closing R14.20, as markets far and wide were spooked by the shock figures. 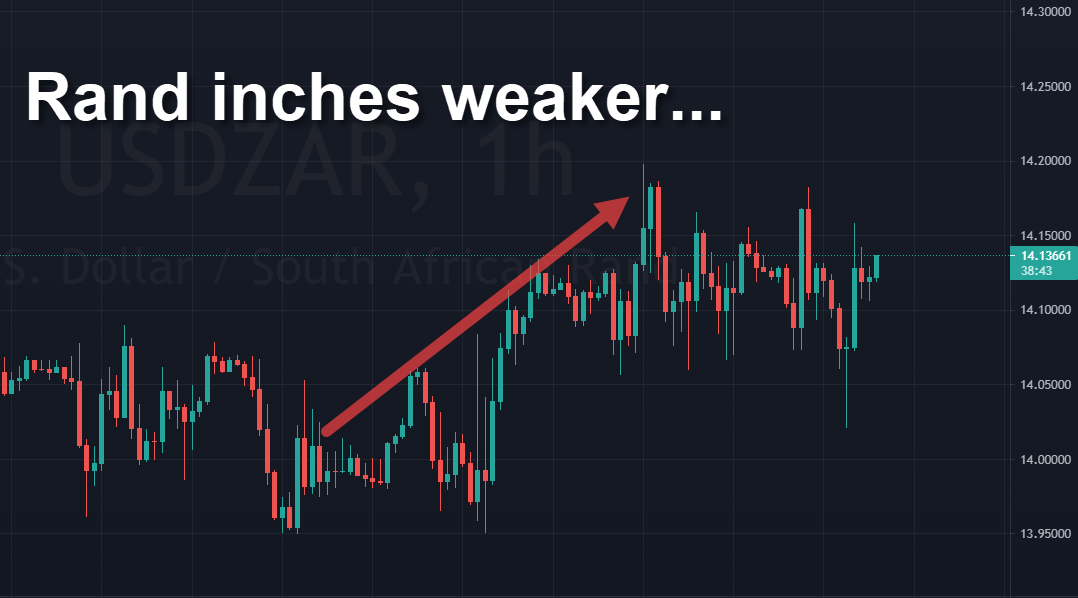 The NASDAQ, SP500 and DOW all suffered huge losses, as the news shook the markets up.

And as we rolled into Friday, the local unit traded around R14.12 at the close.

The ZAR just continues to hold its ground despite every potential of it being tripped up...

...and lives to fight another week!

As we look to the week ahead, we have a have another fairly interesting schedule ahead of us in terms of events, and we will look to see what triggers the next Rand move...

Here are a few to watch out for:

But there is a lot more going on apart from this, with increased tensions aplenty in social, political and financial arenas globally.

Once again, we will be keeping our eyes on what the Rand itself is telling us based on our Elliott Wave based forecasting system to give us some clues for the come days, weeks - and possibly months - ahead.