Another week of volatility plagued the Rand, as we saw more wild swings in value over the 5 days...

And it wasn't just the Rand, as all global markets suffered in the uneasy environment.

Oil was back down again after months on the up, and the Pound took a hammering as the Brexit talks resumed in Britain...

...and then the Dollar finally trying to recover from its multi-month decline.

It was a mix of global and local triggers, so let's get into the full review to see what we can take from all that happened during the week...

Firstly, let's take a look at the biggest headlines from the 5 days:

So let's get right into.

Firstly, with the market's opening on Monday around R16.57 (following the topsy-turvy previous week)...

...and with the events expected over the 5 days, we were not anticipating the volatility to change anytime soon.

The biggest locally was the GDP report for 2020 Q2 - and WOW, it made for some reading!

The headlines blared: The South African GDP has fallen 51% in 1 quarter!

...but also not altogether accurate, at least without context.

As Fin24 clarified in their article for their readers, this does not mean that South Africa's economy 'halved' (decreased by 50%).

The detail here is important, as this metric actually means if the growth (or growth loss in this case) were to be projected out at the current rate, over the course of a year, that would be the net result of the economy. So 12 months of lockdown like we had in Q2, would result in a net loss of 51% of the economy.

The reality is that the GDP fell by 16.4%...so while horrific, not quite as dramatic as the headlines like to make it sound. 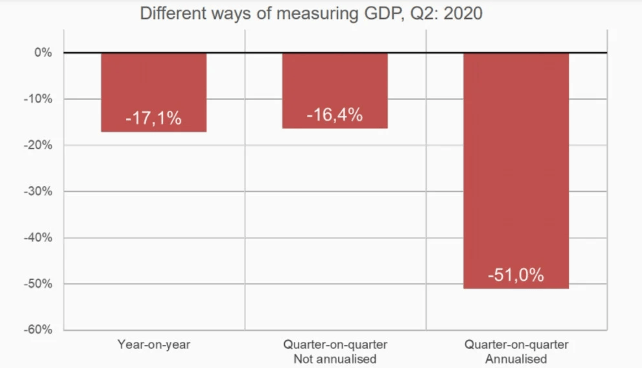 But this showed the urgency of the economic reform promised by Ramaphosa and his administration, as the seriousness of the current crisis is not to be underestimated. Especially when Consumer Confidence is at its lowest level in 27 years…

And right on cue, he came out with a commitment to an implementation plan within the next 2-3 weeks, saying SA had entered a "new era".

He also spoke scathingly of the government's procurement program for PPE equipment, calling for a complete overhaul. He also was extremely unhappy with only R18-25bn of the R200bn allocated of stimulus having been utilized. Businesses are in need of the money and yet it is not being distributed.

Plenty of details were shared over here...

This news was released on Tuesday, and with Ramaphosa's speech in amongst all of this, the Rand kept up its volatile ride, as we saw wild swings in value:

And back to the Rand, we had the local unit continue to zig-zag its way through the week, unable to build any momentum in either direction except against the Pound, which took a beating during the week.

As we look to the week ahead, there is a mountain of events, with interest rate decision domestically as well as abroad being the likely big triggers for some market movement, along with a slew of other data:

So plenty to digest and occupy the market this coming week, apart from all the political and social turmoil that is around.

While the economists of this world will look for market direction based on these events, we will instead be focusing on what matters - what the market itself is telling us and where evolving patterns of sentiment are likely to take us.

The Rand could have a little more steam left to push stronger, but don't expect it to be one-way traffic if our Elliott Wave based forecasting system is to be believed.

It is likely to be a fascinating week ... yet once again.