Another week, more choppy waters for the Rand, as we saw the market bouncing backwards and forwards, as uncertainty abounded...

The unwinding of the period of Rand strength this year is still happening, with tests of the R15/$ level continuing.

It was a combination of local and global events that continued to keep everyone on their toes as to what would happen next.

But this week the real focus was on the US - and the stimulus/jobs debate ongoing, combined with infrastructure bills and more.

That didn't mean nothing happened locally for the ZAR though!

So before the week began, we had our latest update sent out to all of our subscribers with the expected trend for the week.

The count was split, with a 70/30 of probabilities. With the USDZAR at R14.64, our Elliott Wave based forecasting system was looking for the Rand to move over R14.76 which would confirm a move higher towards the R14.99 level in the next few days (see below - click to enlarge)

...and interesting it was. Here were the biggest headlines:

So at the start of the week, we had the local unit opening in the low R14.60s, and many had hopes for the Rand to stage a recovery back below R14.50...

...however, as our forecast showed, the trend was likely not heading that way.

And right away, the pressure was on the local unit. We continued to see lower commodity prices and a stronger dollar after an upbeat US jobs report last week.

The USDZAR was out of the blocks fast, and before you could blink, was testing towards R14.80.

We saw the R14.78 level broken, which was per our forecast would confirm more Rand weakness...

...and the weakness came right on time.

We pushed higher on Tuesday and Wednesday, eventually breaking to upwards of R14.90.

Another rough start to the week for the ZAR, but right as the Elliott Wave based forecasting system had predicted...

And then finally, the Rand's fortunes turned as we saw the local unit push back near R14.60 by the end of the day.

It had been an interesting week as markets are still nervy, with many in the US Fed signalling the current growth rate is sufficient enough to justify a stimulus taper. Reports suggest that the lagging labour market recovery seems to be the only reason for the Central Bank’s reluctance to cut stimulus, but that soon could be changing.

But is the economy as strong as it looked? Or is it a house built on the sand?

Based on the amount of debt accumulated, our analysis is that it is the latter...

...and it has likely got to a point of no return where you have no option but feed the economy more debt in order to sustain it, even though the very action is undermining the core foundations with every stimulus injection.

It isn't just a million-dollar question, with national debt nearing a $29 trillion - with total US debt almost this three-fold!

Heading to the US, the number of job openings at the end of June jumped to a record 10.1 million while the active job seekers were 8.7 million. The extra pay cheques are set to expire next month in which should see more workers returning to the jobs market.

This news coupled with a rise in producer price inflation for July has seen the rand on flimsier footing as speculation grows that the US Fed could soon start tapering its monetary stimulus and raise interest rates.

As for the Rand, we eventually saw the local unit close out around R14.75 at SA end of day...

...it had been quite a week for the battered Rand, but overall, not a lot of ground lost. 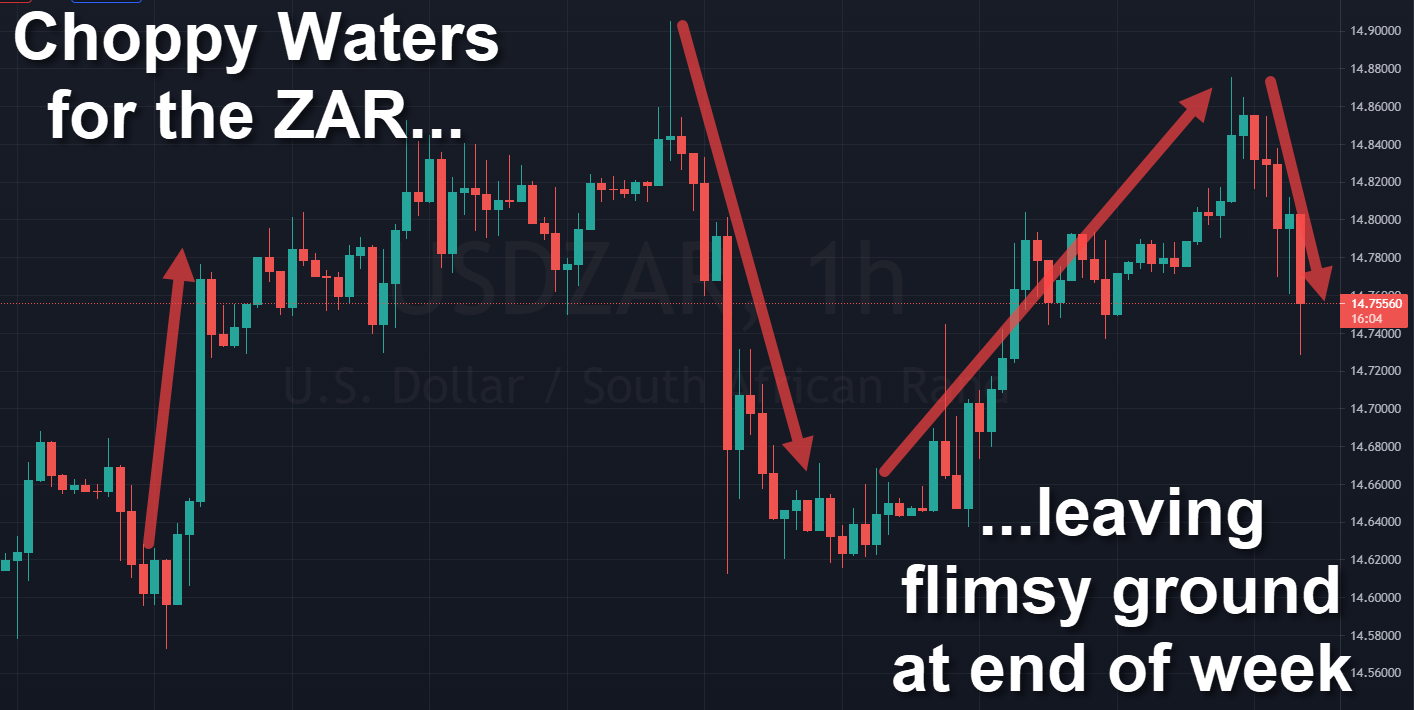 ...it had been quite a week for the battered Rand, but overall, not a lot of ground lost.

As we look to the week ahead, we have have fairly small events in terms of fundamentals, but expect plenty of news none the less...

Here is what little we are watching next week:

We expect some initial strength in the Rand since Friday's reversal, with two possible scenarios playing out. We will be watching some key levels over the next few days and continuing to filter out the noise, simply following what the charts themselves are telling us as per our Elliott Wave based forecasting system.

We suggest you do the same!