Generally, budget speeches, whether they are the yearly or mid-term ones, are a point of high interest in a country.

It is where the most crucial economic figures for the country are announced, by the commander in chief of the country’s finances.

So, a frenzy of excitement, and all anticipation - surely that would be normal?

Not quite so in this Mid-Term speech from Gigaba…

Many knew what to expect: a poor outlook on the remainder of the year, with increased debt, reduced government funds and no real plan for how to stimulate the economy.

And while we don’t want to be with the pessimists on this one, we have to be, as it was nothing short of expectations.

As the Rand soared over R14.00 (and in so doing hit our medium term forecast target area) these were the key points of Gigaba’s speech -

This shocking picture tells a story... 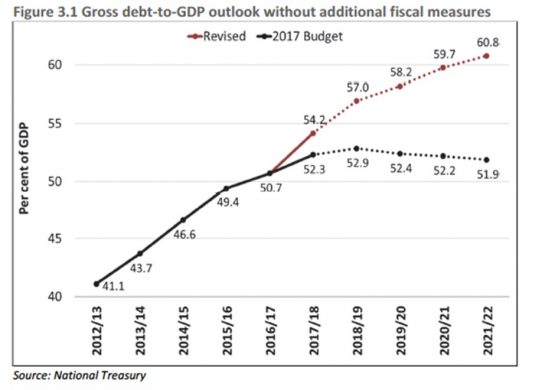 However, it is interesting to see the USA equivalent of this - they aren’t too rosy on the debt side of things either…

Some key articles/videos to read and watch surrounding the speech are over here:

Gigaba is clearly an intelligent person. His ability to quote figures from memory is incredible. However, this parrot fashion knowledge does not appear to help him devise an economic plan of action. And while acknowledging that investment into the country is critical, government has no intention of making it any easier or attractive to do business in SA.

And personally, I do not think the EFF was far off the mark in calling him “a Gupta-stooge”.
One thing is clear - with each of these speeches, confidence (whether local, foreign investor or credit rating agencies) is shrinking. Fast. SA needs more than a change of fortune to reignite its economy. And this is bad news, as it affects the future beyond just a few months, or even years.

Alex Paynter
« Previous Post Zuma shuffles the pack... and the Rand Next Post » Budgets and Shuffles...Rand Takes The Hit

Budgets and Shuffles...Rand Takes The Hit

Budgets and Shuffles...Rand Takes The Hit