Well, now it is official...

The Rand party is over.

For some (namely, exporters), it couldn't have a come a moment too soon.

This is an amazing performance for an emerging market under pressure in the midst of a pandemic...

...and clearly counter to any rational logic.

This is a red flag. And our Elliott Wave based forecasting system confirmed it.

Did you see this move coming?

Read on to see how you could have...

Before the week began, we issued our forecast update to our subscribers.

The prediction was clear...now to watch for the action, as we watched the Elliott Wave count playing out.

And these were the big headlines for the 5 days that we looked for triggers from:

And so the week began with the Rand trading at R13.71, and largely Monday's trade was very quiet.

But on Tuesday, the triggers started to come.

Ramaphosa announced the long anticipated (or rather, dreaded) return to lockdown level 3.

This will affect businesses and gatherings with curfews, and just generally add more levels of complexity to daily life - a surefire way to stumble the economy all the more.

This is not what is needed now, just as SA was looking to round out the second quarter with some good growth...

...how much longer will countries go through these endless cycles of authoritarian lockdown-open-lockdown, despite there being no evidence that they have done any good whatever, in fact, the contrary?

...but the real trigger was yet to come.

On Wednesday, which was a holiday locally, was the big Fed meeting - and there came the shocker of the week.

A sharp change in direction by the FED regarding their interest rate timeline saw a big pull back by major investors.

Whilst the changes outlined during the meeting don’t seem to be planned for any time before the end of 2023, the switch to a more hawkish stance shows that the FED can in fact be surprised (despite truckloads of info) and nothing is ever set in stone.

From months of saying that they are not concerned about inflation, they suddenly considerably raised their expectations for inflation this year and brought forward the time frame on when it will next raise interest rates.

So it is a strange situation, and things remain murky - and the markets did not like this change... 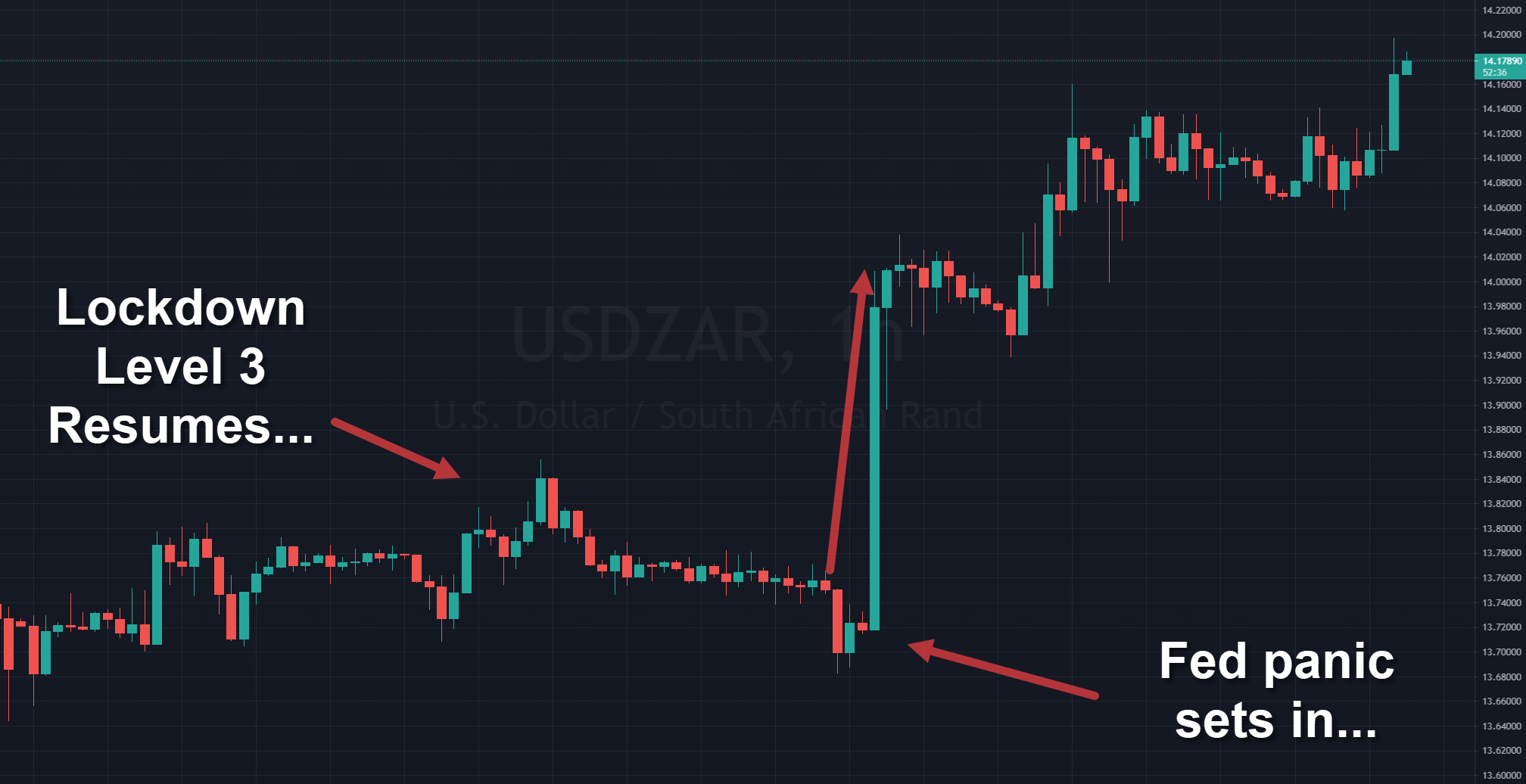 The Rand ripped weaker, smashing nearly 30c in an hour to head back over R14/$ before the end of the day!

And this was all while SA was not even at work...showing the power and ability of global markets to affect the Rand's value.

Whilst a weaker rand is less than ideal for consumers of import reliant goods, as an export heavy country, this may help the economy to get back on its feet.

Friday saw the Rand testing R14.30/$ levels as it was clear that that the last two weeks had totally changed the momentum in the markets.

This move was right in line with our other outlook that we had issued on Wednesday, indicating that the Rand would push higher toward R14.30.

The waves of emotion are an amazing thing to watch - I just trust you had the guidance you needed to make the right decisions...

This next week is setting up to be really interesting, with a bunch of events set to take place, providing more triggers for the market. The market will be on high alert after the volatility following the Fed's meeting, so expect more nervousness and volatility as markets take stock of where things stand.

As for the Rand, we have now reversed fortunes, and while the bias is for more Rand weakness, it is unlikely to be all one way traffic, and we will be watching some key levels the next week, based on our analysis. We suggest you do the same!

Alex Paynter
« Previous Post Eskom Crisis gives Rand jitters to back over R13.70 Next Post » USD Rally Slows to Give Rand a Break...