Eskom trouble for some time...

...but this week things have really taken a turn for the worse, sending the power utility into crisis mode.

From being close to keeping up with demand to moving to Stage 4 load shedding was nothing short of a disaster, and it really gave the ZAR the jitters.

How had things gotten so bad, so quickly?

With Eskom, unfortunately you are always one step away from disaster.

However, it has prompted some massive changes in the electricity space - so let's get into the full review, to see how this is going to affect business, the economy, and ultimately: the Rand.

Before we get into the week, this was our outlook for the USD vs ZAR on Friday the 4th of June. With the ZAR trading at R13.41 to the Dollar, the expected trend was for it to bottom out above R13.24, and the move higher to test above R13.6875... (forecast below - click it to enlarge)

So now it was just to look for the triggers, along with the Eskom worries.

Here were the other big headlines from the week:

Now firstly, let's start with the opening of the Rand...

Trading around R13.40, the local unit had now broken into the lower R13s, and was really starting to have economists and businesses alike in absolute disbelief due to the amazing run of strength.

However, when these extremes are hit, you know a market is due to turn.

This week, it appears Eskom provided that catalyst for the move.

As the week progressed, so did the levels of load shedding, steadily moving up through stage 2, stage 3 and eventually stage 4 by Wednesday.

This was a crisis, make no mistake about it! You can talk about an ecomomic recovery "until the cows come home", but if you have no electricity, the economy is dead in the water.

To be fair, he is stuck between a rock and a hard place - the power utility is hopelessly outdated, under-maintained, and now needing to comply with new environmental legislation. So he cannot work miracles, but all the while, the country is losing money as a result of the utility's failures.

But, there are some positives to draw from this - and they came in the way of real change in the electricity space for SA:

This was huge news, and has the potential to create massive change in the electricity supply, as well as producing extra jobs and investment into the country...so maybe the final straw snapping was good news in the end!

But the Rand did take a hit as a result, moving from it's pretty position to upwards of R13.75!

And getting back to the Rand, the market played a bit of yo-yo through Thursday and Friday, but eventually swung back again to end around that R13.75 mark again. 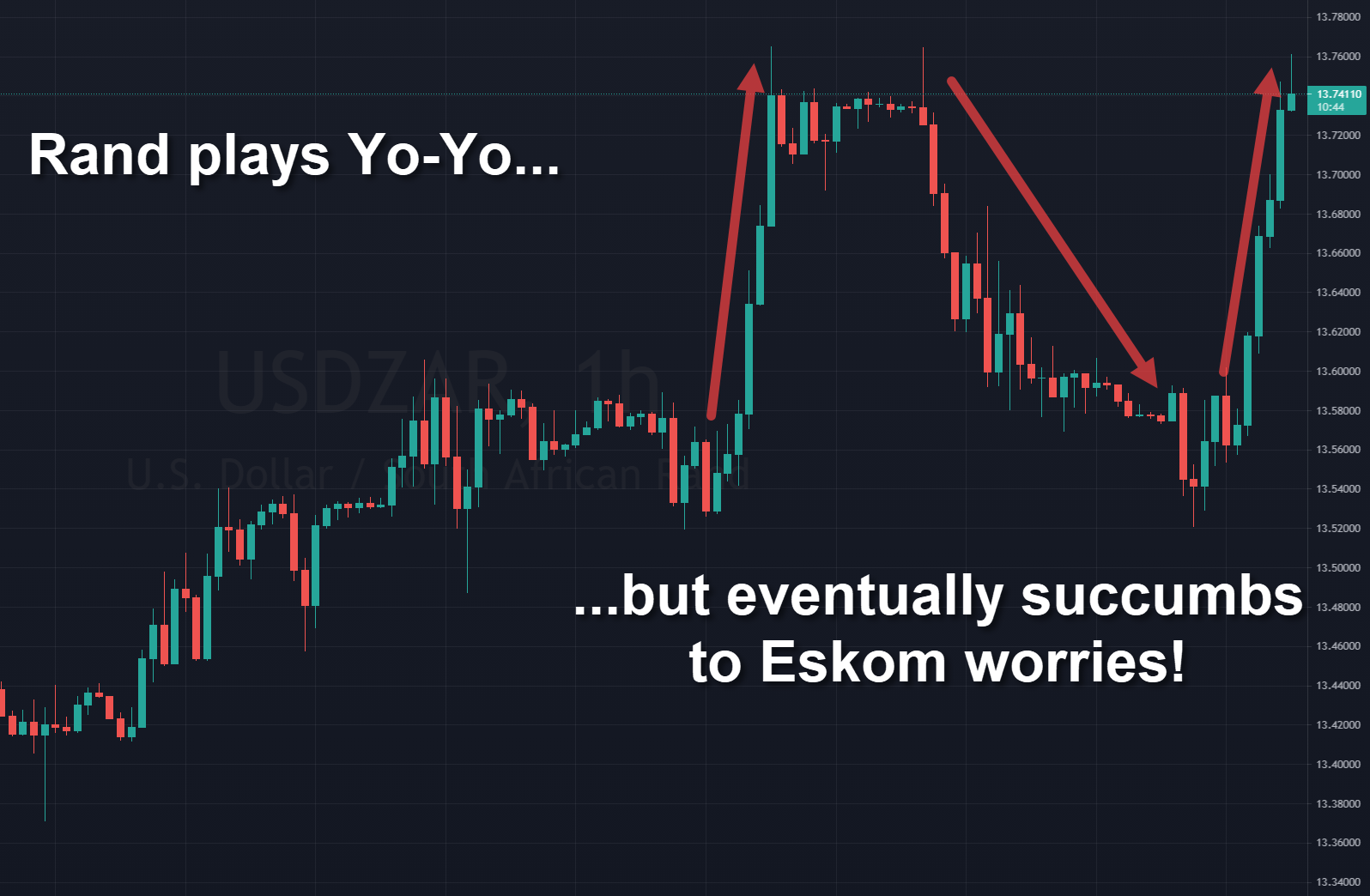 Despite the volatility, the Rand had played out the week as we had expected with our forecast, moving from the lower target area to test higher levels...

...the Elliott Wave based forecasting system had called it again.

As we roll onwards towards the halfway mark for the year, there are few events of note to watch in the coming week:

The big possible mover would be out of the Fed, but plenty else to keep the market on their toes.

As for the Rand, the next week could prove pivotal, with some key levels being watched to confirm whether the Rand's fortunes have finally reversed, or whether the local unit has any further gas in the tank.
Please take our Rand forecasting service for a test-drive!