Another week, another volatile 5 days!

Otherwise known as same old, same old when it comes the Rand...

It was another week of chaos and a sobering look at the effects of stopping a global economy for more than a month...

With the Rand maintaining its frenzied trading, there seemed to be no respite for businesses who were trying to plan around their forex exposures...

...while the lockdown period meant that many businesses were not working anyway, but the effects of a volatile and weaker Rand will nevertheless take its toll.

As reopening commences bit by bit across the world, we are wondering quite what type of a new world we will see...

...and for economies like South Africa's, what will be left as the pandemic leaves an already stuttering economy in tatters.

Let's get into the full review (to show how you could have had clarity for all that happened), and then we will look to the week ahead.

First things first, here was our forecast from Friday the 1st of May, giving our clients the outlook for the next few days.

I realize that is quite a complex forecast...but that is what the patterns were saying.

The fact is, markets are complex, and the Elliott Wave Principle is the best tool we know of that is able to provide some clarity amidst all the fog and the noise. It was certainly looking like it was going to be an interesting week.

With the Rand opening the week over R18.80, many were watching to see if we would yet again have another push over R19, and then fears were of R20/$...

...as we showed with our analysis, the Elliott Wave Principle was saying otherwise.

And that was what we saw on Monday as the market turned and pushed lower to touch around R18.30 when Tuesday evening came around.

Some relief for importers and consumers...but as our forecast had said from Friday, we would then see the market bottom out, and head higher again.

Which is just what we saw over Wednesday/Thursday as the market pushed up to over R18.80 again!

The Rand rollercoaster was in full swing...

Now, the fact is that you would likely have read dozens of reasons from economists and Rand "experts" as to what had caused the Rand to first strengthen ... only to weaken again...

Now this all sounds very plausible...

...and, yes, it is true - big events do (sometimes) tend to trigger some large moves.

But that is all they are: Triggers...

And that, is why after-the-fact analysis is basically worthless to anyone - looking back when it is too late to do anything about it.

Because it is not these triggers that determine the direction, but the underlying mass sentiment at the time that will do so.

And that is what we focus on...

The Elliott Wave based analysis system we use is not perfect (show me a system that is), but it allows us to track human sentiment (the driver of all liquid markets), and give us an edge in the market as to where we can expect to go (a true direction-giver)...

...allowing you to make decisions, and take action - in time!

Now, with that said, we can take a look into some of the events that did happen, because they are still helpful and important to get the scope of the global situation right now:

On the back of all this, we saw the Rand trade down as low as R18.29 on Friday evening, ending the week significantly stronger than it began... 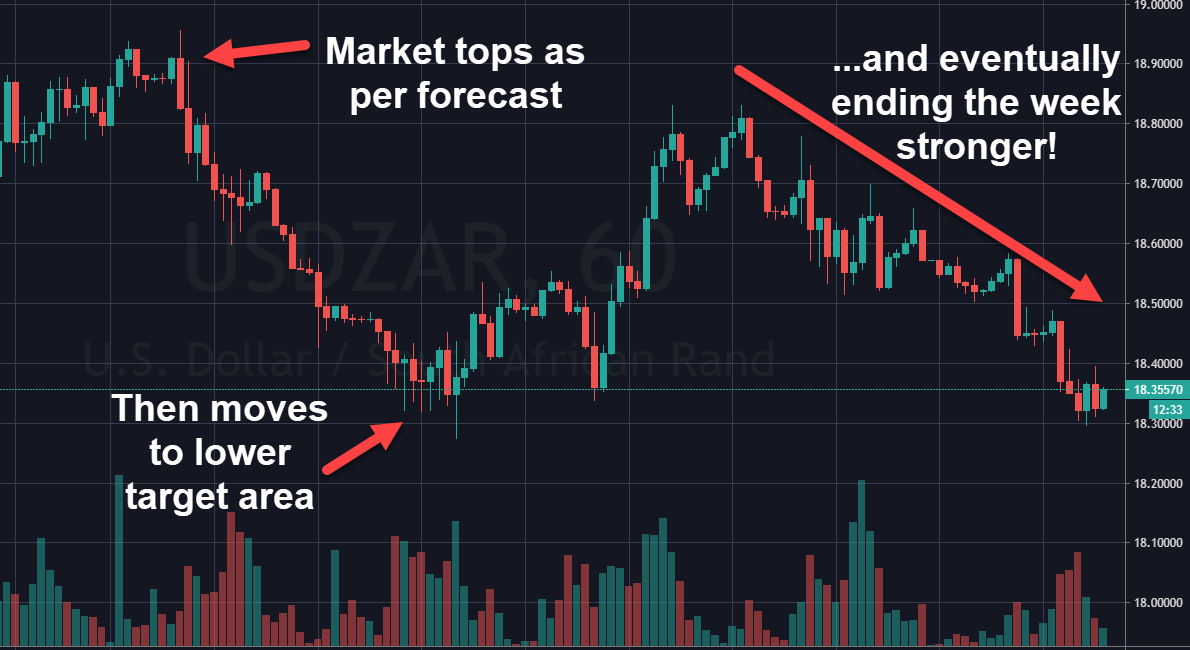 Well, another week of lockdown dawns, with hopes that this forced hibernation is hopefully nearing an end...

Once again, expect more shocking data to come from economic releases, with continued volatility in financial markets, including the Rand.

As far as fundamental events go, there are a few to watch as potential triggers, with some of the more impactful being:

But that is all the are - simply triggers.

It is the patterns of sentiment at that point in time that give us the likely direction.

And that is what we will focus on - what the patterns are telling us - ahead of time...

...and we suggest you do the same.

Alex Paynter
« Previous Post Rand Whipsaws Back Toward R19/$...did you see it coming? Next Post » Risks abound for the Rand...where to next?