Another intriguing week has come and gone - as the Rand enjoyed more of the same testing down toward R15/$...

Once again, it was counter to logic.

We had clients contacting us, worried by the next downgrade from Moody's & Fitch as to how it would affect the Rand's value.

And rightly so, this was a big change.

But once again - we saw the market's irrational reaction, as the Rand edged stronger.

Demonstrating once again that events do not give direction to the markets - human sentiment does.

But let's get into the full review and explain that a little more...

So to start the week, the first news hitting everyone's desk was Moody's and Fitch's downgrade of SA's investment grade rating...

It was a body blow for an already undermined economy from the pandemic - and just when the country was expecting some leniency in these crazy times, the ratings agencies dropped the hammer.

Different associations expressed their disappointment with the rating change which saw SA drop further than their previous BA 1 rating.

The ratings agencies have highlighted high government debt, weak growth and exceptional high levels of inequality as the main reasons for the downgrade. There is, however, light at the end of the tunnel for investors as S&P have kept SA’s credit rating unchanged with a stable outlook.

What the country now faces is a further stretching of its already strained resources...and even less wiggle room for persons like Mboweni to turn things around.

Nothing but negative for the Rand, that was for sure...

Well, it was not as simple as that.

When markets opened early on Monday morning (just after midnight), the USDZAR was at R15.41.

How? Why? Nobody really can give a rational answer...

...because such is the nature of irrational markets.

Markets are moved by sentiment - and these kinds of events only provide a trigger.

Which is why you see so many economists looking at market movement AFTER it has happened and then try to rationalise WHY this happened - by using some event or bit of news.

Anyone can do this - and it doesn't help us AT ALL to expect future movements.

But, if we can track the human sentiment through techniques like our Elliott Wave based forecasting system, then you can get an idea of where a market is expected to go in time and price.

So what followed after that was the USDZAR tracking back up to R15.45, before then resuming the downtrend: 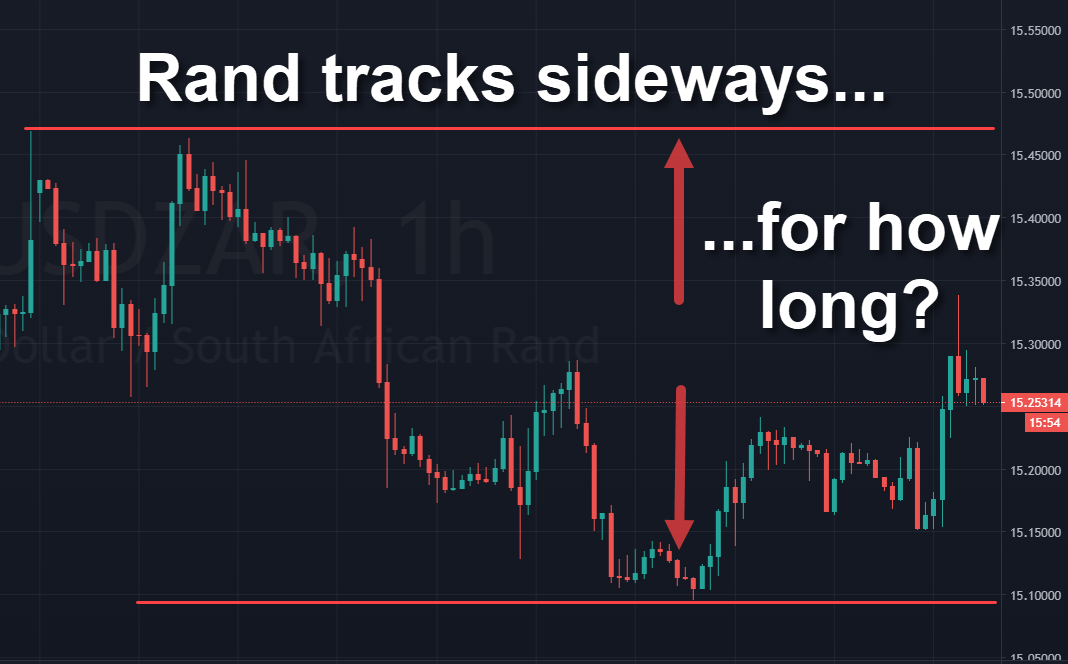 It had been a crazy week, that was for sure - as economists were turned on their heads once again with the Rand flirting with R15/$!

As for the Rand, we saw rather a stagnation towards the end of the week, ending in the South African close being around R15.25... When will the breakout come?

Well, as we have seen with other markets this week, when it does come, it comes fast.

Expect nothing less from the Rand, and be prepared. The tide of strength is due a change...

As we head into the new week, there are some potential economic releases which could provide triggers, with the below being some of the main ones

But all eyes will likely remain on potential lockdowns globally.

And then, of course, the US election results.

While Trump agreed to some initial preliminary access to federal resources to Biden, he continues to push forward with court action on the alleged voter fraud.

Legislators in some of these states appear to be taking these claims seriously, with Pennsylvania, Michigan and Arizona all agreeing to hearings.

Based on the Pennsylvania Senate hearing held this past week (as well as new federal lawsuits), there certainly appears to be evidence of significant anomalies, irregularities and deficiencies that occurred, including huge 'vote dumps' for Biden in key swing states in the early hours of the morning after the election - seemingly coming out of nowhere...

Expect to hear of more details in Michigan and Arizona hearings this week.

As we have mentioned before, we quite expect this to go all the way to the US Supreme Court before a victor is announced.

As for the Rand, expect plenty volatility once again. We will keep looking at our Elliott Wave based forecasting system to give us some clues, with two key levels that we will be watching to confirm our larger degree trends.