A really choppy week for the Rand, as it battled the varying fortunes of the US Dollar which once again traded weaker...

It is a familiar story of the Rand being thrown about like a ragdoll, while global events trigger sentiment changes.

Right now, events in the US are major triggers that we keep a watch on.

But overall, sentiment goes wider than just one event or one concern… and thankfully, our Elliott Wave based forecasting system keeps tabs on the patterns, rather than the individual events.

This week involved some really big events, as we saw the ZAR test well below R17/$, before breaking back above...

...only for the market to turn on it's head on Friday, once again...as predicted!

Join us for a deep dive into all the action!

There were plenty of newsworthy events across the 5 days, the majority on the global scale:

So, as the big week kicked off, the Rand was on the front foot, having ended the previous week strengthening toward R17/$.

All eyes were on Thursday - Fed Chair Jerome Powell was due to give some insights into the Fed's monetary policy for the coming years, in a delayed announcement due to the pandemic.

It was between a rock and a hard place for the Fed, as interest rates have not recovered since the last financial crisis...

...meaning they don't have much in the armory as strong a toolkit to help kickstart an economy.

Now, it looks like the US is going to be stuck in a zero or close to zero percent interest rate situation for the foreseeable future.

Some of Bloomberg's expectations were for interest rates being where they are still in 5 years time.

The Fed's goal for the last 10 years has been to target the 2% inflation level, as being healthy for the economy (we have a different view on this) - but this has been a struggle, and while the last few years have been better, it remains a battle to maintain. When Powell's speech finally rolled around on Thursday, he maintained that they were going to putting more emphasis on boosting employment and allowing inflation to rise above the Fed’s 2% target during economic expansions, keeping rates lower for longer. Economists interpretation was that the "Fed will allow the economy to run hot before applying the interest-rate brakes. It means the first increase in interest rates may not come into view for many years." 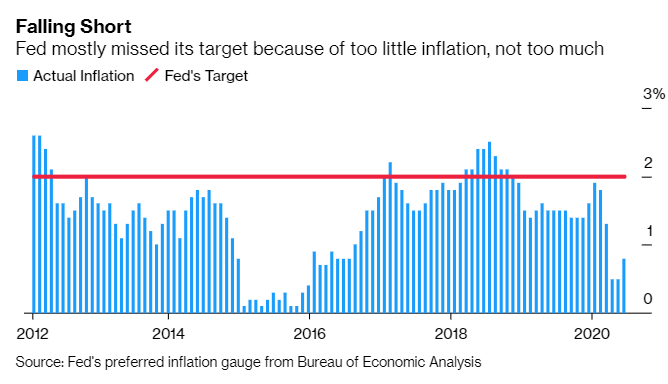 It is going to be interesting to see how the Fed (and other central banks) juggle the different situations while walking the tightrope, as we go into the coming years.

Don't be surprised if the whole lot come tumbling down - and a DEFLATIONARY period is what we see (directly opposed to what the Fed and other central banks want...but at this stage, out of their control).

And it is not the Fed (or other central banks) that sets interest rates, but the MARKET - as shown clearly in this blog post.

Before this all happened, our forecast was released on Wednesday with the market at R16.87, showing that we expected the market to still take another dip stronger against the Dollar, into the R16.65-16.22 area. If we were to push higher to hit R17.11 and above, then our outlook would be invalidated, but while that level held, we were expecting to see the Rand strengthen... (see below the forecast - click to enlarge)

And interesting it was, as Thursday provided highly volatile trade for a range of markets, as Powell's speech created a lot of hype around all markets, whether forex, metals, cryptocurrency or stocks.

But as quick as it came, it was gone, and markets calmed back down again after his speech...very typical of what was hyped up to be a major event, and while it did create some volatility, it ended in a big to-do about nothing.

As for the Rand, in amongst all this, it had traded stronger versus the Dollar through Monday and Tuesday to test as strong as R16.71/$ - comfortably the strongest level of the month.

However, that didn't last for too long, as the Dollar found support there, and we saw the Rand tracing up over R17/$ again after Powell's speech, testing very close to our R17.11 invalidation level before falling back...

Friday brought good news - and a whole bunch of it!

The Rand reversed right at our invalidation level, topping out at R17.1070...

A full 50c turnaround in just a few hours!

It was right in the middle of our target area from Wednesday's forecast, and it meant we were ending the week off on a high note, along with all the South African importers.

As we look to the week ahead, we have several events, including the notorious trigger - the US nonfarm payrolls:

But there is also a lot more going on both locally and globally, and again, most eyes will be on the US, as the countdown to the election begins in earnest, with the fallout from Hurricane Laura and continuing riots and anarchy sparked by the Marxist BLM movement, all amidst a pandemic that is keeping the economy hamstrung.

A lot of concerns and uncertainty prevails - which means more volatility!

The market has entered our targets so we will be watching the price levels to confirm our preferred outlook for a bottoming out soon, based on our Elliott Wave based forecasting system.