A rough week for the Rand and for markets globally ensued, as we saw oil crash to unprecedented levels and the Rand test all time highs again...

As we near the end of April, the reality of SA being delisted from the bond index becomes very real.

But in the big scheme of things - this has become a small talking point compared to the lockdown thanks to Covid-19.

Ramaphosa's new plans to stimulate the economy are welcome...but will they be effective - and enough?

Especially as South Africans itch to get back to work...

There is a whole lot to look at, so let's get into the full review.

To start with, here are the major headlines from the last week:

A jittery Rand began the week around R18.75, having endured a torrid previous 5 days.

More pain was likely on the horizon according to our forecast, which expected an extension of the weakening up toward R19 and above...

And Monday was when the oil crisis unfolded - a quite stunning turn of events saw the market crash to -$37 a barrel (yes, that's a negative sign!)

(we will go into this in more detail in our upcoming newsletter - stay tuned...

...all I can give is a sneak peak: some quality content coming your way soon in our latest offering to stay on top of the global crisis)

In essence, the demand for oil has dropped to a critically low level, which saw the market collapse on the final day for locking in May's futures - as no one wanted a delivery of oil.

This is the lowest we have ever seen Oil drop - and a sign of the seriousness of a global lockdown. It is nothing like a war in which demand continues - the stopping of travel and business has totally changed the global outlook for so many markets. This shift will continue to have a major hit on the energy industry, especially the US, Russia and Saudi Arabia.

But the Elliott Wave Principle obviously had its own take on oil, and where we are going, which is what we will cover in our newsletter.

In SA, Ramaphosa released plans throughout the week on how the new R500bn stimulus package would work to kick start the South African economy, as well as how the exit from lockdown would work.

As expected, this would be a phased approach - one step at a time, slowly reducing restrictions as time goes on, starting May 1st...

...this was some hope for business, but not the complete end of lockdown like everyone desires.

As for the stimulus package:

And here are some of the sectors it will be spread across:

The effects of the package will remain to be seen - and we maintain the view that however necessary these stimulus packages are, they are only adding to the problem, not solving it. Credit is the issue - not the solution!

Briefly we saw the Rand test R18.70 midweek, but that did not last for long... 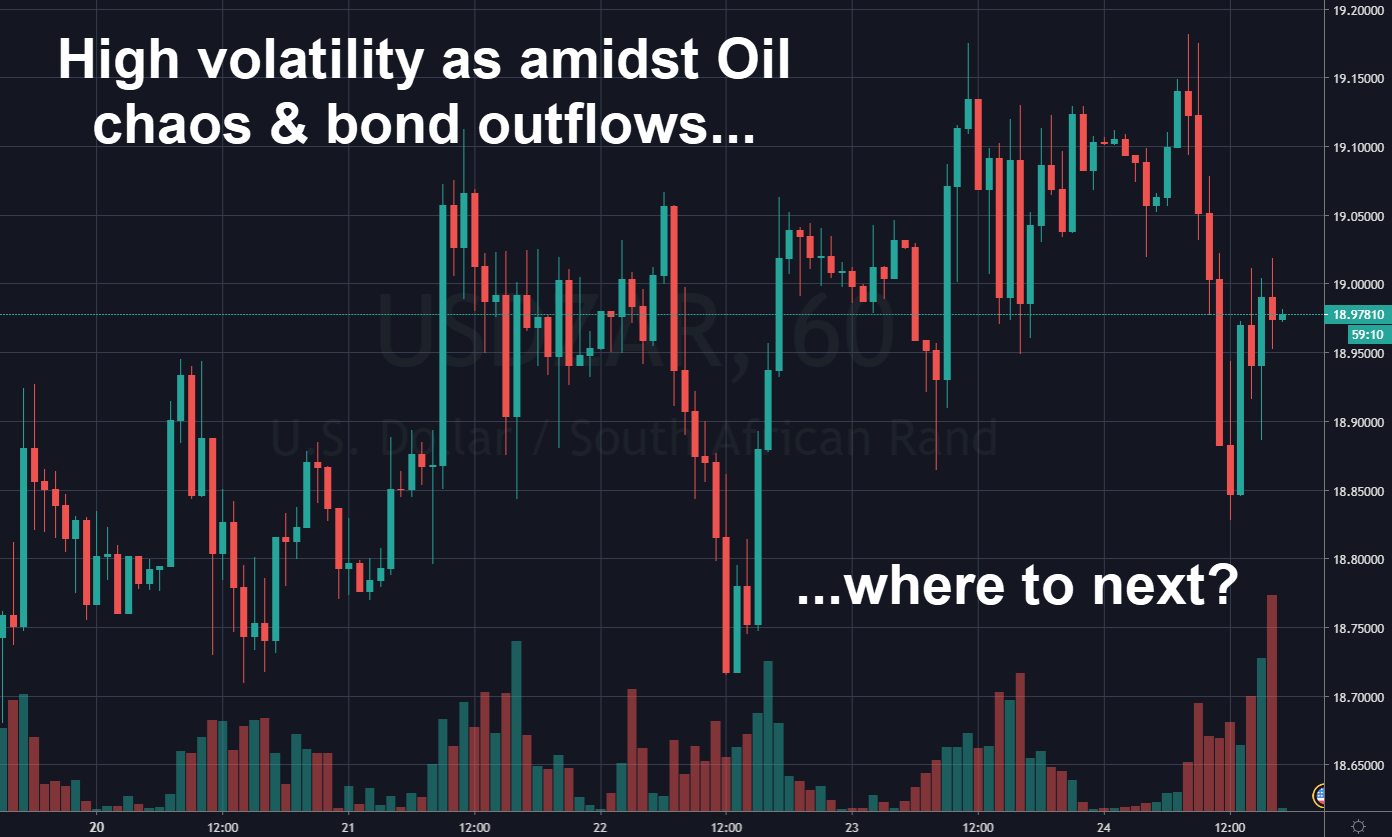 And then in other news

The latter half of the week saw the Rand test R19.20/$ again, before falling back to close at South Africa's end of day down around R19 to the Dollar...

Another tough week for the markets - and the pressure set to continue until the global lockdown slowly releases its clutches on economies...

Before looking into this week ahead, if you have not already, please start with viewing the replay of our webinar:

"The Global Crisis Has Begun - Where Are We Heading?"
It is free to access by clicking the link above which will take you to the YouTube replay.

We found the information we presented essential to plan for the future...

...and so did hundreds of our clients.

If you find it of the same value, please share it with your colleagues, family and friends.

As we look into the week, we have a slew of fundamental and economic releases and events that can provide provider triggers, with some of the main ones being:

In essence, expect a similar trend to the prior weeks...more figures to shock everyone.

What we will be seeing in economic reports is the enormous damage that COVID-19 lockdown has already done weeks ago already. And with damage still being done as we speak, there is clearly more to come.

But as for the Rand, we will continue to focus on what the patterns are telling us to give an objective view of direction...

Alex Paynter
« Previous Post Rand reverses gains to test R19/$...where to next? Next Post » Rand Whipsaws Back Toward R19/$...did you see it coming?