How the tables turn...

From the Rand running against all odds to break lower the week before, this week was a very different story, as we saw the local unit take an absolute pounding over R17/$.

How does this happen?

It didn't make sense, with economists blaming lockdown for the Rand's recent weakness...

...yet when the country moves to level one, the market absolutely tanks?

Such is the game of tracking the markets - it seems impossible, but when you have a system that is free of human emotion and irrationality (which almost always sends you the wrong direction), you get to prepare for these moves ahead of time.

Read on to see how we called this last week...

Before the week began, we issued an update to our subscribers on the 3 markets (USDZAR, EURZAR & GBPZAR) as to what we expected over the coming 5 days:

It was certainly going to be a fascinating few days...

And fascinating it was, with some major headlines:

The country was now at Level 1 lockdown as of midnight, and many were hoping this was the start of positivity and the economic recovery.

For some workers, it was all systems go after having been temporarily laid off for months.

As a result, economists had high hopes for the Rand...

...but their hopes were dashed!

By mid-afternoon on Monday, the whole landscape had changed!

All expectations had been blown out of the water...except ours and our subscribers, as in just a few hours, all of our forecasts had been validated.

What had caused this? Or even triggered it?

Economists put it down to second wave fears and the rising US & China tensions, as well as the US approaching elections with so much at stake...

...but actually, who cares what triggered it?!

All that matters is whether you had time to prepare for such a move!

The power of our Elliott Wave based forecasting system is that it doesn't rely on specific events happening, but tracks the underlying patterns of sentiment and mass human emotion, which then suddenly manifest themselves in moves like these.

And then turning to other news...

And getting back to the Rand, we saw the market take a bit of a breather down to R16.80 odd over Thursday's public holiday, but then continue the upward trend into Friday's close: 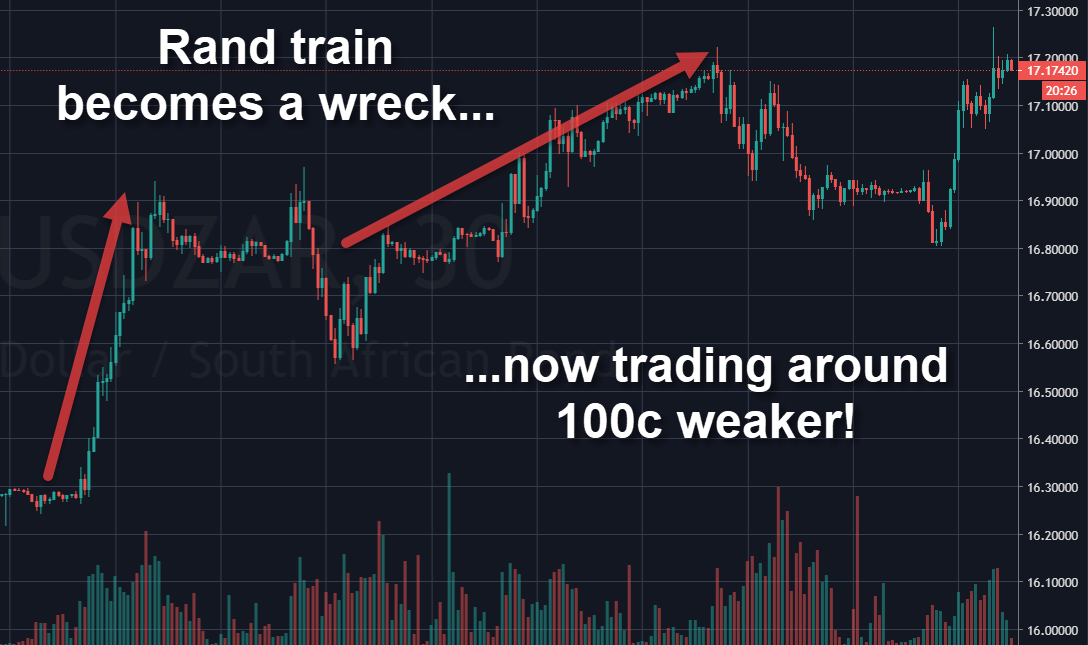 What a few days it had been, as the market had followed our Elliott Wave based forecasting system to a T!

And before we knew it, another week had come to an end with the local unit closing out around R17.15...

This week sees a number of major events which look set to shape the news cycle the next few days, and could provide plenty of big triggers:

The hotting up of the US elections is going to be a focal point on the global stage, along with the long-awaited stimulus bill, if that can be moved forward...

On Tuesday night, we will see the first Presidential Debate between Trump & Biden, which is where they will be quizzed on much of their policy ideas, which markets will be watching closely around the world.

But as we saw this last week, it isn't as simple as positive or negative news...

Rather, it's a case of having an objective view of where the market is likely to head before such events, so that you can prepare and take action ahead of time!

We have updated a number of the longer term charts, which show that some very interesting few days, weeks and months lie ahead...