February 2019 continues to be one of the most interesting months in recent times when it comes to the Rand and SA's economics and politics.

This week was the big budget speech from Tito Mboweni.

And an important week for the Rand if we were not going to run away back over R14.50/$.

There was a pile of action, so let's get right into the review.


Before we get into the events, there was our forecast from Friday the 15th, giving the outlook for this tumultuous week:

The expectation was for the market to top out shortly in the 14.09 to 14.39 area, falling lower to test R13.9522...not what one would have expected from a week which included a very difficult Budget Speech, but that is what the wave count was saying...

...against every bit of emotion and gut feel, but that was the forecast we sent out to our clients on Friday.

There were a host of big events during the week, so here are a few of note:

Well, where do we start with the review?

It can only be with the nitty gritty of the Budget:

This may not have been the biggest point to mention first up, but it was a sign of Mboweni and Ramaphosa being serious about cutting costs back: Members of Parliament and Executives will not be receiving increases in 2019!

Perhaps they finally realize the cash is running out...

Anyway, here are the main highlights:

So, quite an earful. There was a lot more, which you can read over here

Not a positive budget, but it couldn't have been with all the present mess, yet Mboweni's delivery was a far cry from the likes of Gigaba's clueless attempt in 2018.

As always, promises and budgets are one thing - the proof is in the pudding. Will this all happen, and will it all make a difference?

And then of course, we get what effect it had on the Rand: 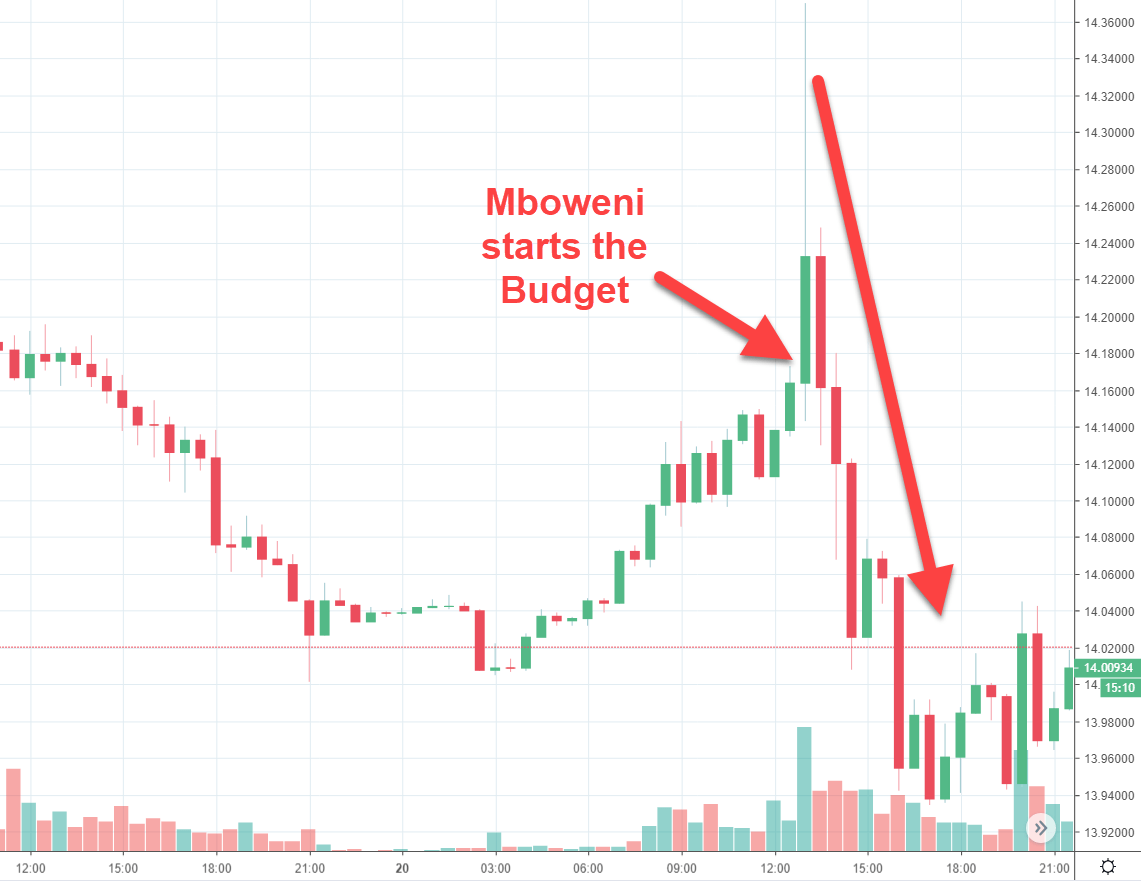 Just a few minutes into his speech, the USDZAR had already lost more than 30c, crashing to R14.37...

...only to completely turn it around to close the day below R14 to the Dollar!

Explain that one, economists...?

The budget is notorious for resulting in a crash flash for the Rand.
Which it did.
But the effect it had was turned around in minutes...amazing!

This perfectly validated our forecast from Friday, as the market reverses and moved down to touch R13.87 on Thursday...

...showing once again how you CANNOT look to the events to give you market direction!


There was a lot more that happened across the course of the week:

There was a lot more too from this busy week, but we can't cover it all!

And with that, the Rand closed out the week just a touch under 14.00 to the Dollar, about 10c better off than where it opened on Monday....


Can you believe it - we are already into the final week of February!

And what does this week hold in store?

Well, for a start, we have a speech by UK's Theresa May trying to salvage Brexit - which will be followed by (another) vote. And we also have testimony by the US Fed's Chair Powell.

Both these could provide big triggers for moves in the markets.

Coupled with that, there are some medium impact US and local data releases which could also weigh on market sentiment.

And then, of course, there is President Trump's ongoing battles on the South border wall and China trade war that will keep things interesting.

But what does this mean for the Rand?

Well, last week has shown that events do not give direction, but are merely triggers.

And, once again, we won't be looking to the events themselves to give us direction, but analyzing the patterns of sentiment to give us (and our clients with Rand exposures) an edge as to where the market is likely to head in the short, medium and long term.

Based on current analysis, we are expecting some possible initial weakness but within a Rand strengthening bias going into the week.