Well, what a week!

The Rand’s marvelous November ended on a high note (apart from Friday!)

For the second time running, the Rand seems to be having a magnificent end to the year.

Again, confusion reigned, as reactions from the market did not coincide with events, leaving economists baffled…

…however, our forecast from the previous Wednesday had shown the expected trend that we would break close to R14/$ during the week, before topping out and heading lower - which was just what we saw...

....apart from missing our target area by a whisker.

So, despite news not making sense with the market movements, the Elliott Wave Principle saw this coming - and does manage to, more often than not!

But there was a lot more to the week than just that, so let’s get into the review…

Well, where to start…?

The week began with the news from the long-awaited S&P Credit Rating agency…(technically on Friday, but it was very late)

And SA got the all clear (an unchanged rating) - so to speak, because S&P already has the rating as sub-investment grade. In fact, they gave even more than that: S&P even said that they do not see Land Reform significantly reducing the amount of investment which goes into SA (perhaps not immediately, but we cannot help but see an impact...)

But here is the funny part…

With all the expectation being for a lowering of the grade being terrible news for the Rand, and a stable or positive rating being the best news possible, we saw the market react the exact opposite to the news: 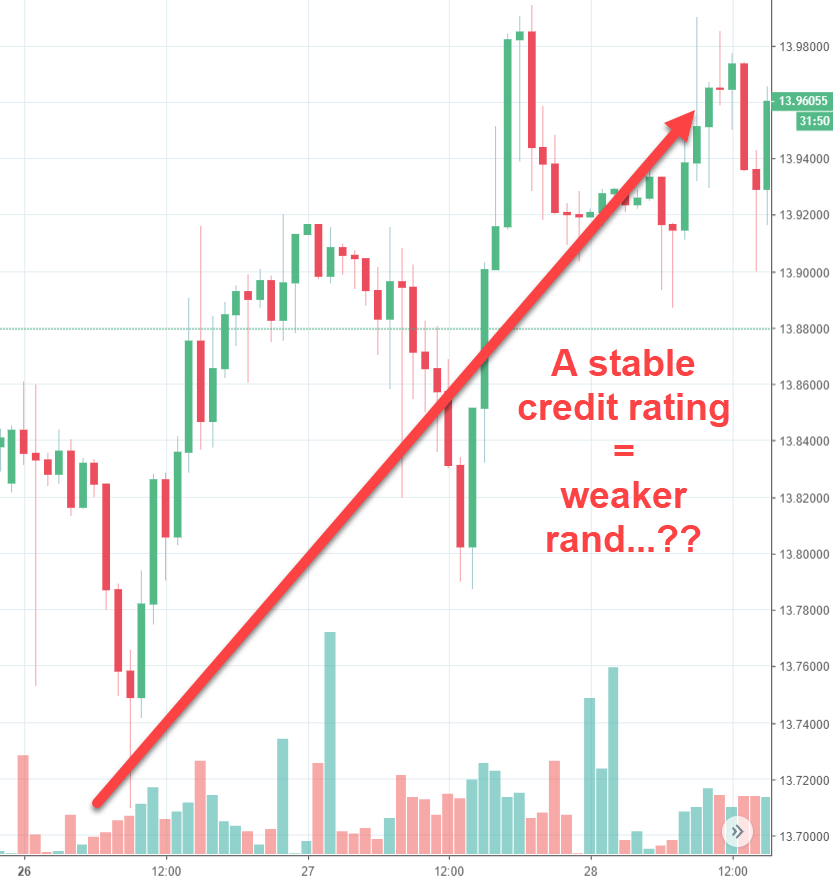 There was the other side of the news too, which was that Trump was considering more tariff increases if a trade deal was not struck with China.

The Trade War continues to simmer, hurting emerging markets… But this just proves the point: you can look one direction and use that news to justify the Rand weakening. But you can look the other way, at other positive news, and then it doesn’t tie up.

Such as that petrol price is due for a whopping R1.80 drop as we head into December. How’s that for news? Surely consumer and Rand positive?

Simply put, we can’t trust the news to give us anything other than triggers for the underlying sentiment!

Anyway, the rest of the week for the Rand was great to watch.

On Wednesday, the USDZAR market made its move, punching down from a touch under R14/$ to break R13.75 in the evening.

This was on the back of news from the Fed that the US interest rates policy was nearing neutral - which is not altogether good news, because it means there could be a ‘shock’ rate increase, which is bad news for emerging markets. A flexible Fed policy is uncertainty for all involved.

Thursday provided more good news, as investors started to pile back into local bonds - over R1.75bn had been purchased just during the week up until Thursday morning.

Impressive figures! And even more impressive was the Rand breaking to R13.60/$, with consumers and importers willing it lower!

Here were a few of the other major headlines:

Friday provided a disappointing end to the week for the Rand, as it weakened over 1.5% back over R13.90 to the Dollar. This was after it had made a 4 month record level breaking to R13.59/$, only to lose some of the ground that was won.

So, a lot of the good strengthening through the week, mostly wasted in Friday's retracement. Still, there is longer term momentum with the Rand. Can we kick on and break that psychological R13.50 level…?

The Rand has had another good start to the week - and it is big week of events coming up that could provide significant volatility...

We have a number of US, UK and EU events as well as the big SA one: the Current Account for Q3.

On the US side, we are watching the Non-Farm Payrolls at the end of the week, but also the Trade Balance and FOMC speeches earlier in the week.

Over the weekend (Friday and Saturday), we also have the G20 summit in Argentina - with tensions building between the US, China, Saudi Arabia, France and more. Sure to be some fireworks from that!

Most importantly, what we are going to be watching is the Rand's reaction...

All of these events are only triggers, and the crucial levels in terms of the wave counts are what matters.

The fact is, you will never get any direction based on news and events.

This is what the Elliott Wave Principle (our forecasting methodology) provides, which we use together with a combination of price-ratio analysis, momentum and time-cycle studies to give clients the most likely outcome for the next few days, weeks, months and years ahead.

Overall, based on our analysis, we still have a Rand bullish bias in play, but (again) don't expect it be all one-way traffic. To see the full details, why not give our service a 14 day test-drive.

Gratis. No obligations. No card needed.